Our final full day in Portland got off to a slow start. It was Sunday, so half of us wanted to watch football. I guess there was an NFL game in London? The stadium looked pretty packed, but I don't know how many of those were actually Europeans. Apparently the cheering is all over the place because there's no home team, haha. 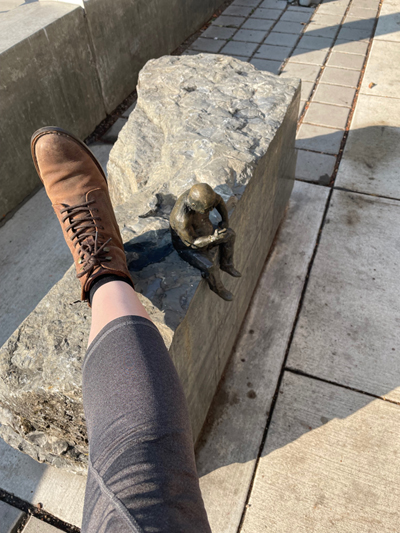 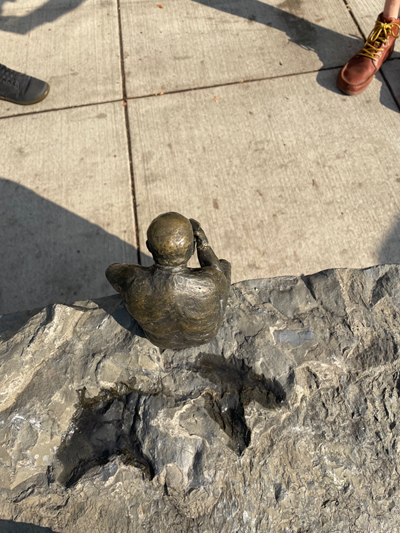 The rest of us went out and got coffee (I got a "chocolate milk" that tasted like skim with cocoa powder floating on top... I think I got ripped off) and to look at the stores that weren't open last night. 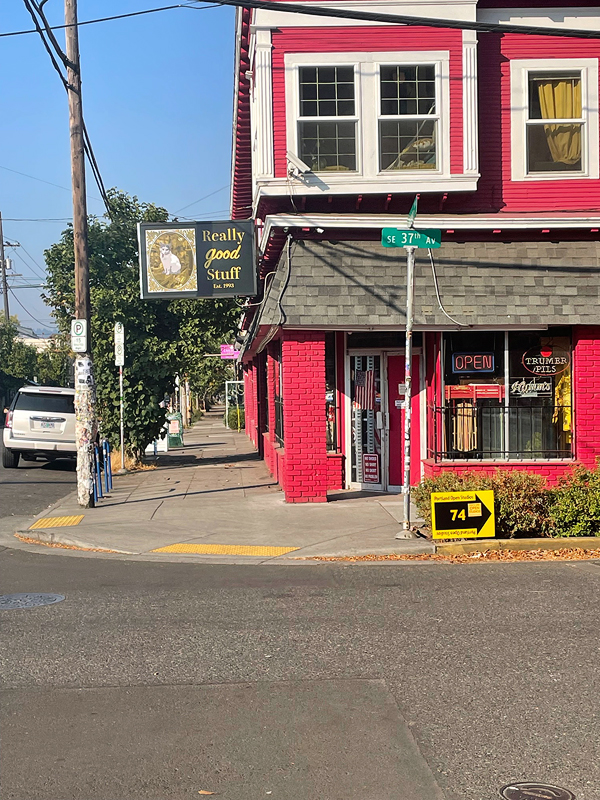 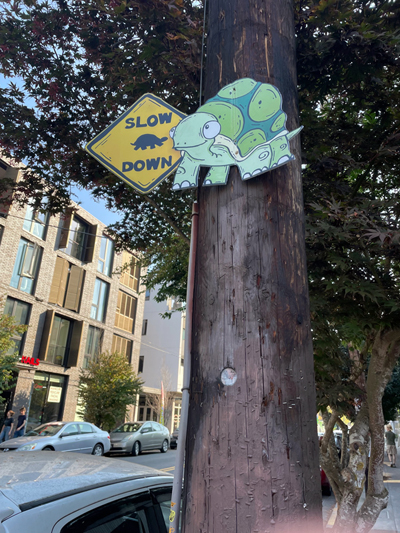 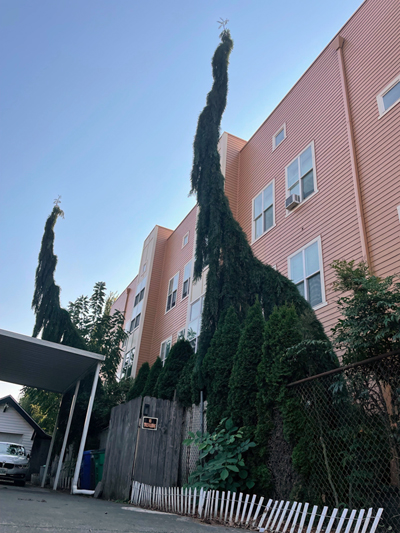 Jaq says there's a local artist who sells paintings of slow animals, and the fact that they end up on poles and in yards is purely on the customer. I also saw a manatee and a snail. 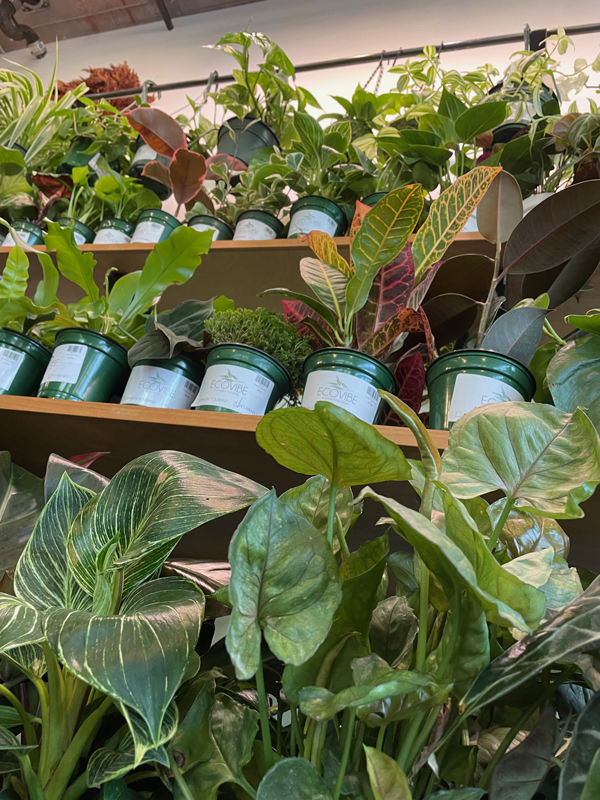 Stopped in a plant store where the party line was "Ugh, if only that could fit in my luggage..." 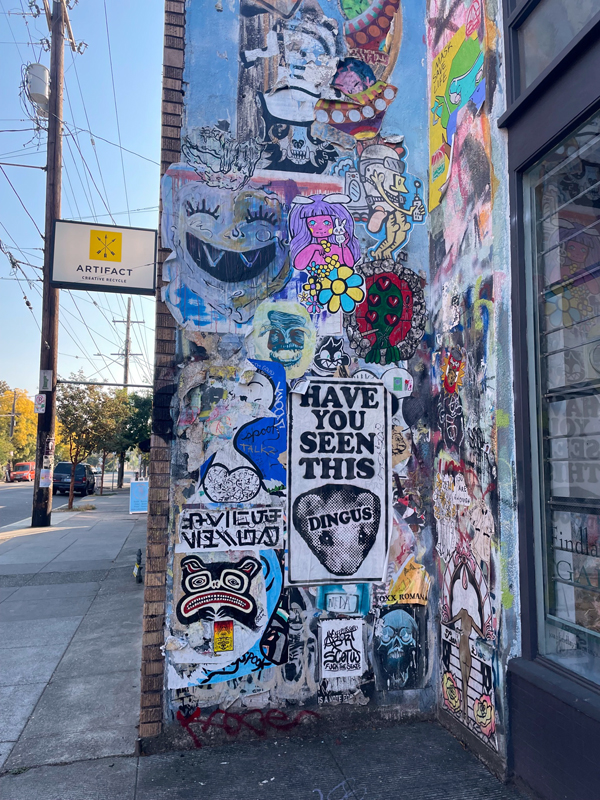 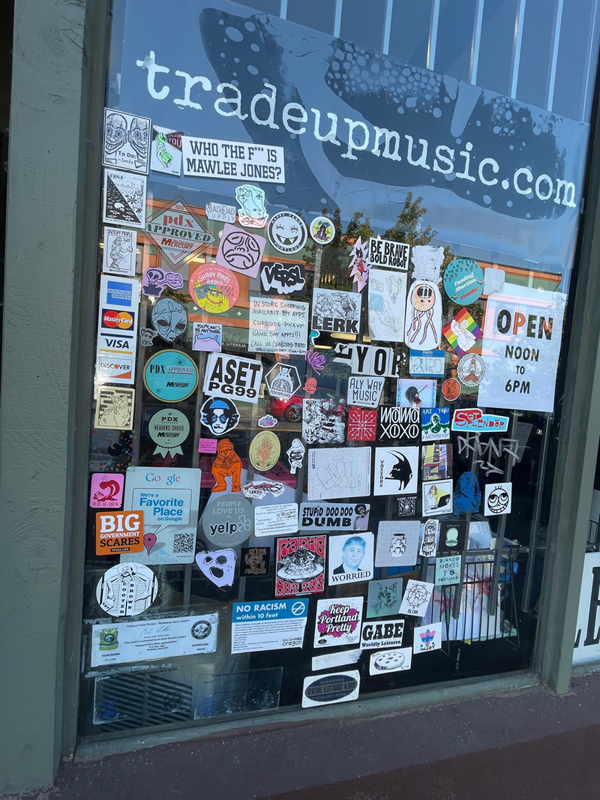 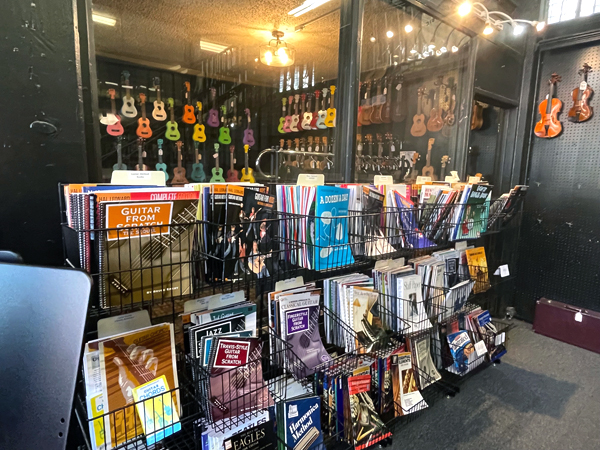 I was amused by this music shop's Ukelele Containment Room. They even had bass ukeleles with fat rubbery strings.

There's a craft store chain here called Collage that's pretty nifty! Big placard out front saying to use they/them pronouns when in doubt. Inside was a neat mix of useful supplies, trendy kits, and rummage boxes of tiny trinkets. Most notable is the wall of washi tape, which... I don't use washi tape for much besides covering my computer cameras, but the shiny-colorful-illusion-of-usefulness can't be denied. I got a red one with anatomically-correct hearts because it reminded me of Prime Motivator's vellum liner notes. Also a small wooden ruler shaped like a cat. 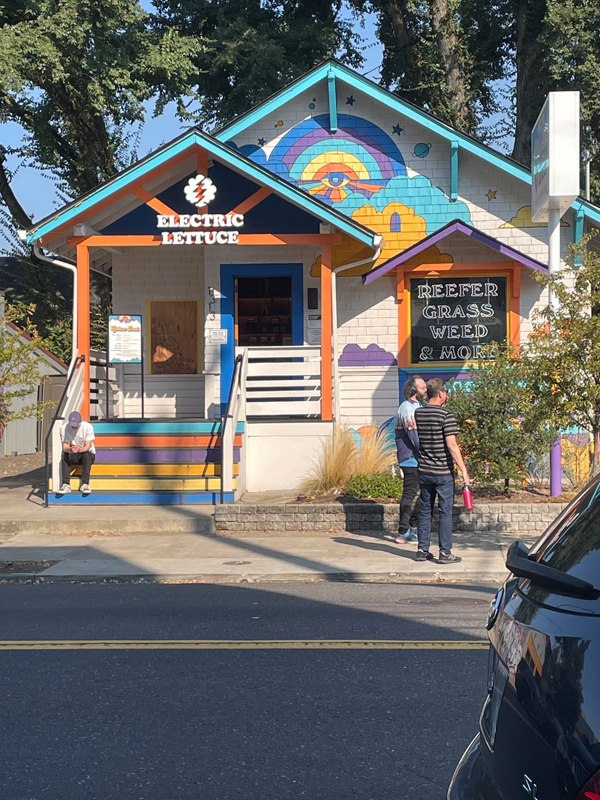 Great store name #3. Kinda bummed I couldn't convince anyone to go in here, but it would have been just to poke fun at the self-seriousness... we are not weed people. 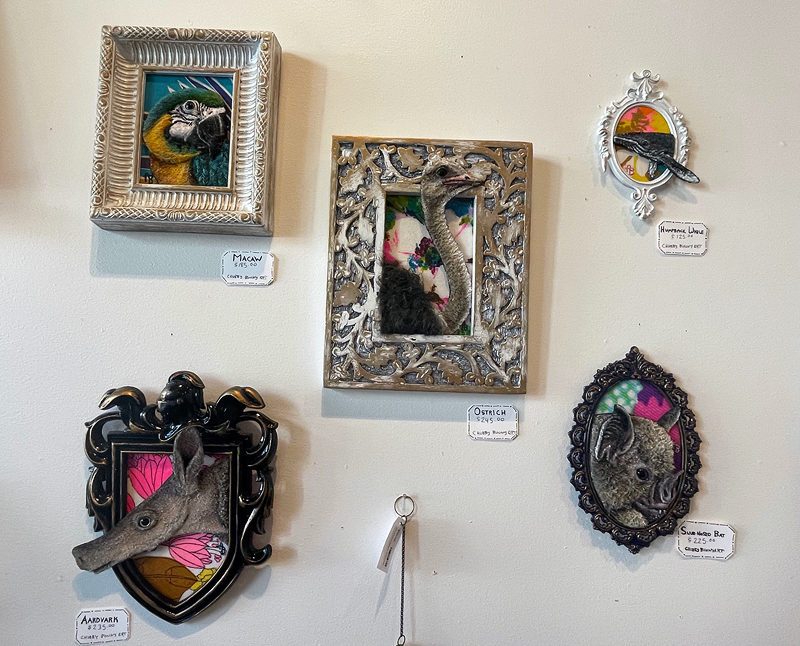 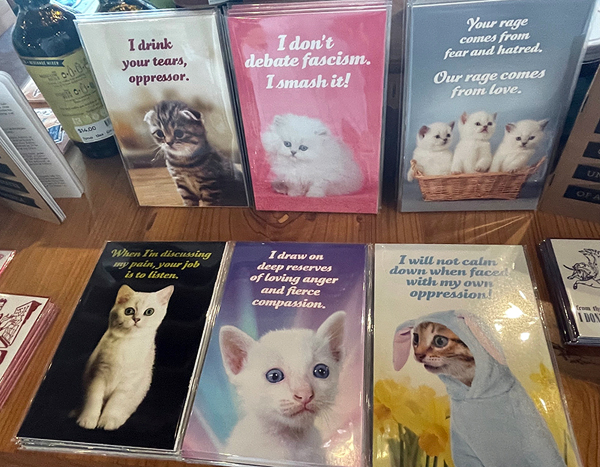 We checked out a few feministy-twee places, which are very my jam because they tend to like bright colors and animals. I found a crate of these journals made of old books, which I was HIGHLY ENTICED BY until I remembered that drawing in a fancy sketchbook makes me feel like I'm defacing 5000-year-old cave art. 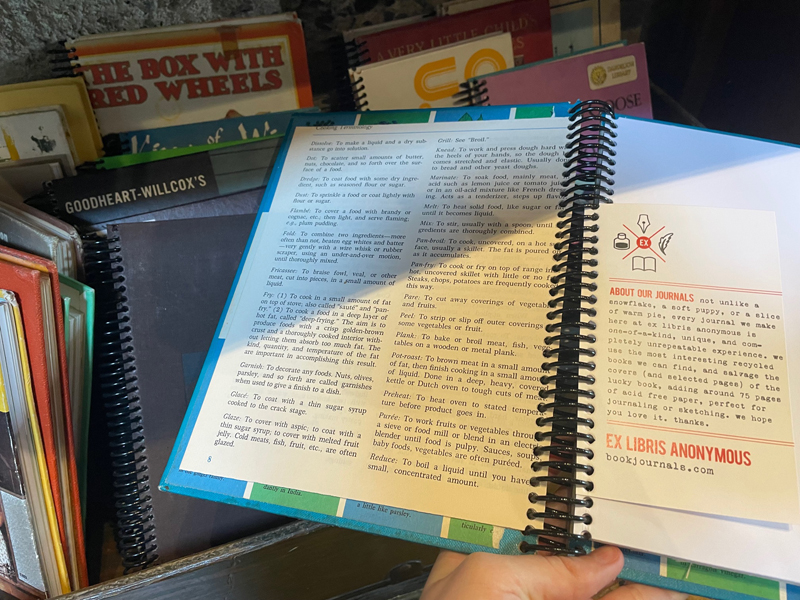 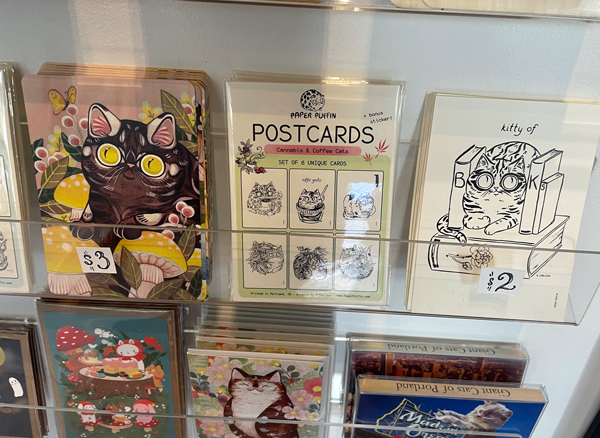 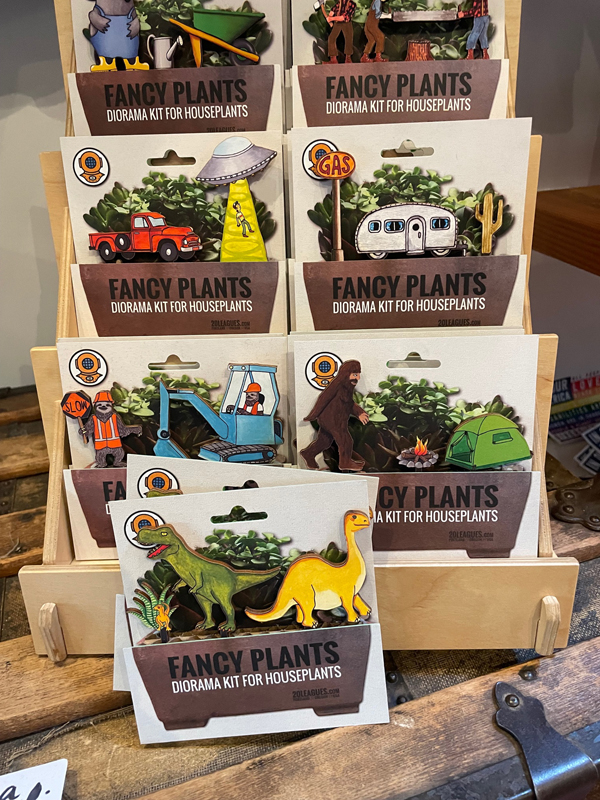 We also stopped in a basement shop called Catlady-something that was aggressively rock-n-roll themed. Love any place with a wall of cowboy boots. 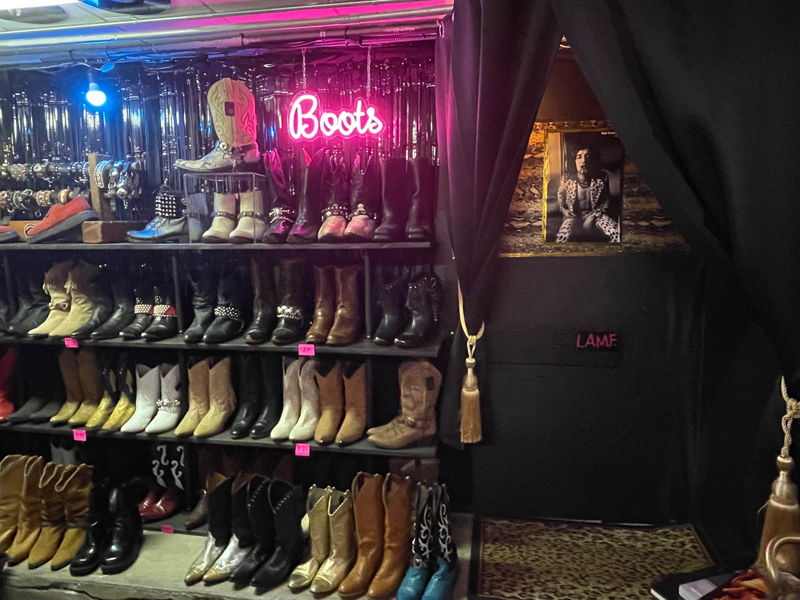 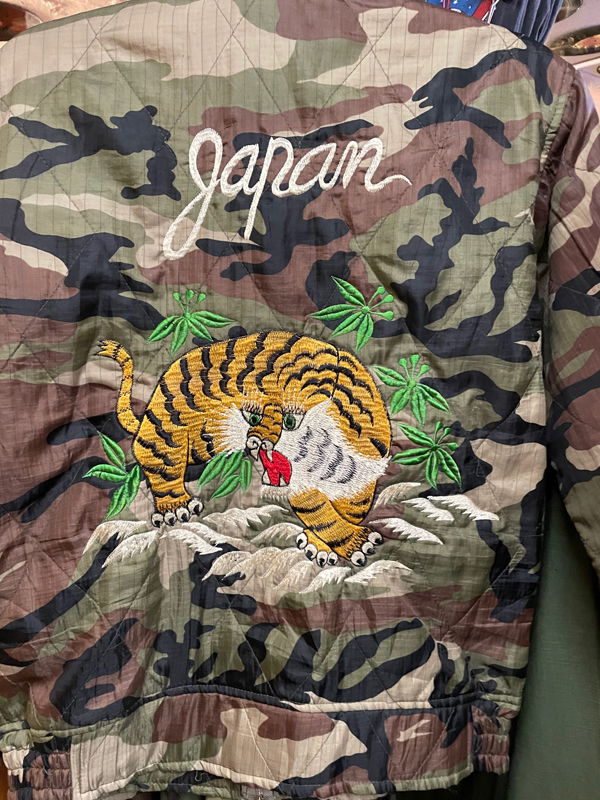 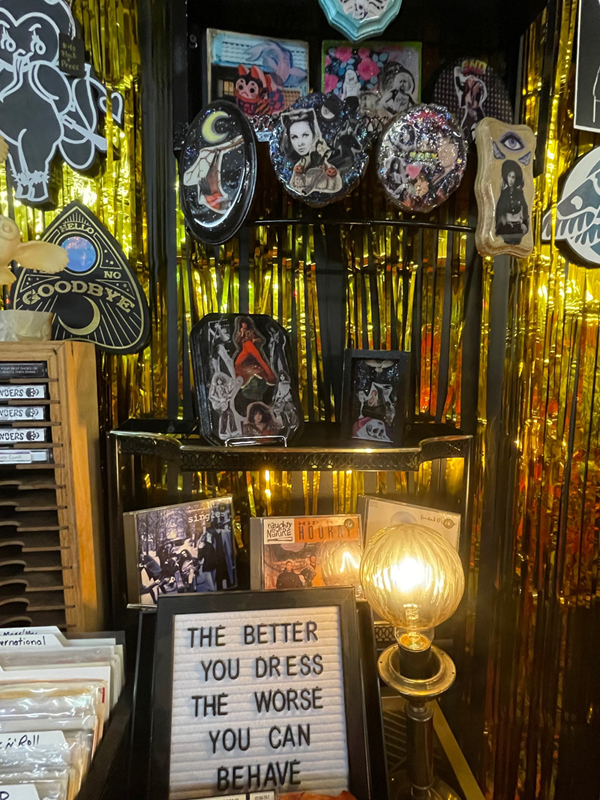 Vibrant and friendly, with tons to look at. The sentiment about crime is very "this store does not carry cash" and "witches will curse you for stealing from our small business". I'm honestly most excited to come back and try all the food spots! 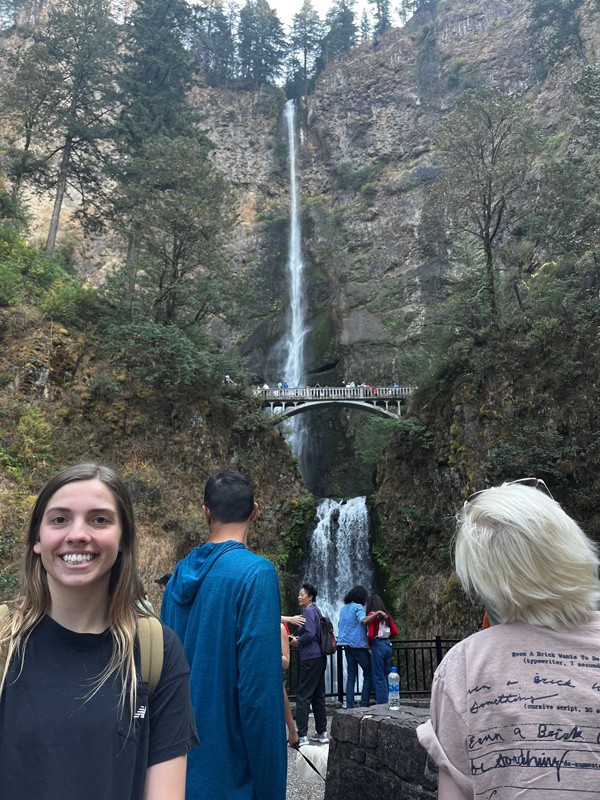 When we were done shopping, everyone packed into the cars to head to the mountains.

Multnomah Falls was the most touristed-out thing we did the whole trip. Which is wild, because it's kind of a brutal hike. Less than a trail proper, it's more of a long, uneven wheelchair ramp-- a steep set of zig-zags carved into the side of the mountain, mostly without railings. On the scary side, it overlooks a beautiful river and the state of Washington. In terms of forward-facing scenery, it resembles a cattle chute into an abbatoir.

So yeah, it was really weird seeing people show up like they'd just come out of an Applebee's. I saw people from all over the world, of all ages, speaking all kinds of languages, and in all modes of dress. One asian guy near the bottom was shirtless (and ripped) under a shrugged-off suit jacket, like he was waiting for a photographer. Tons of little kids. Another lady was going up in business casual and dress flats??? Jesus Christ. I pray for her heels. 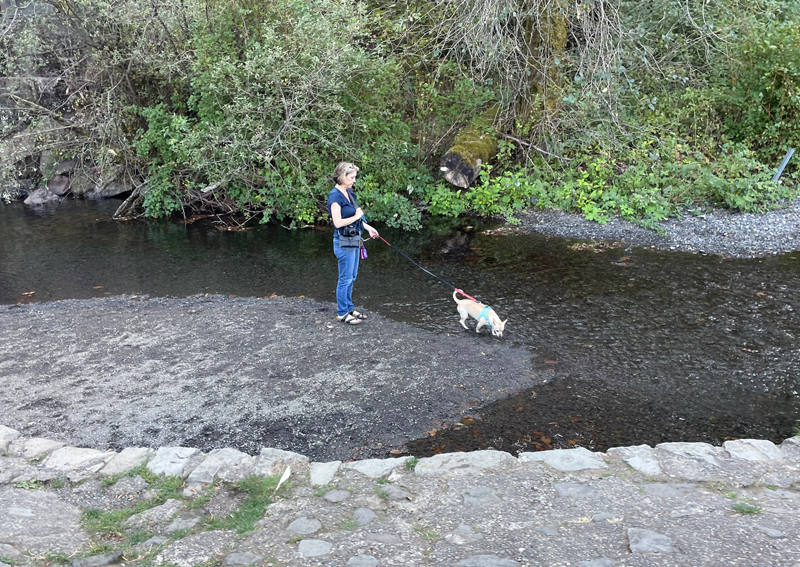 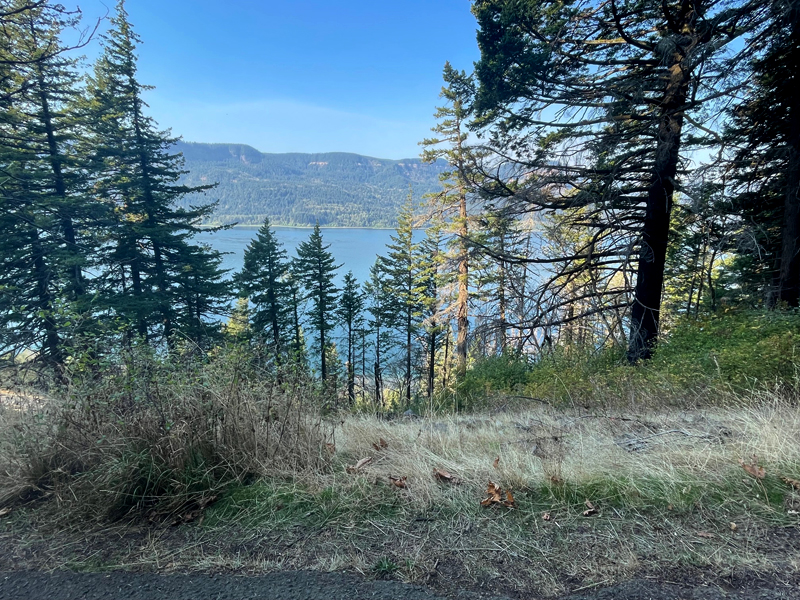 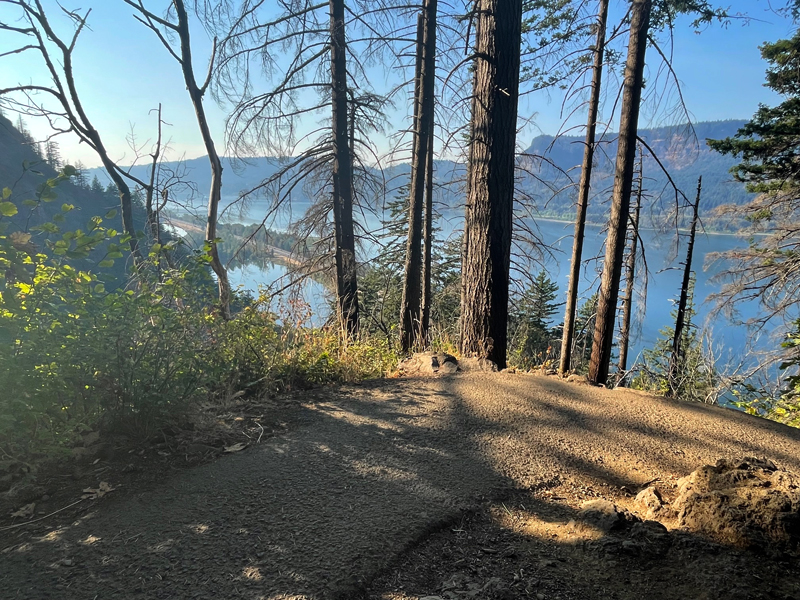 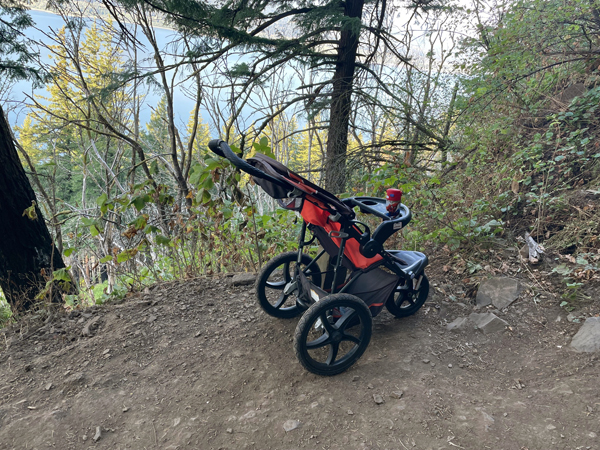 Halfway up the trail we found this abandoned stroller. We have no idea how it got this far... in either direction.

3/4ths up, a sweetheart of a guy with basically-my-haircut said "your hair looks nice!", which made my day after stumbling up a buncha rocks. I should have said "you too", haha. 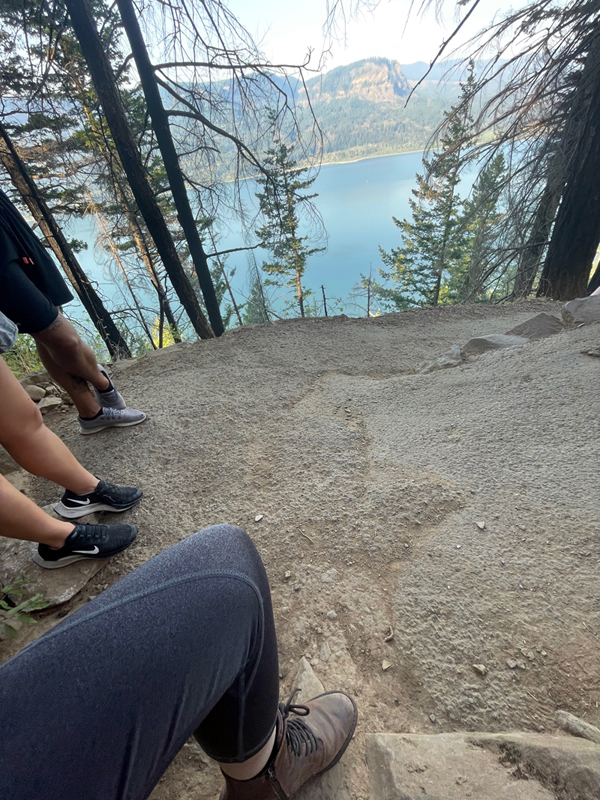 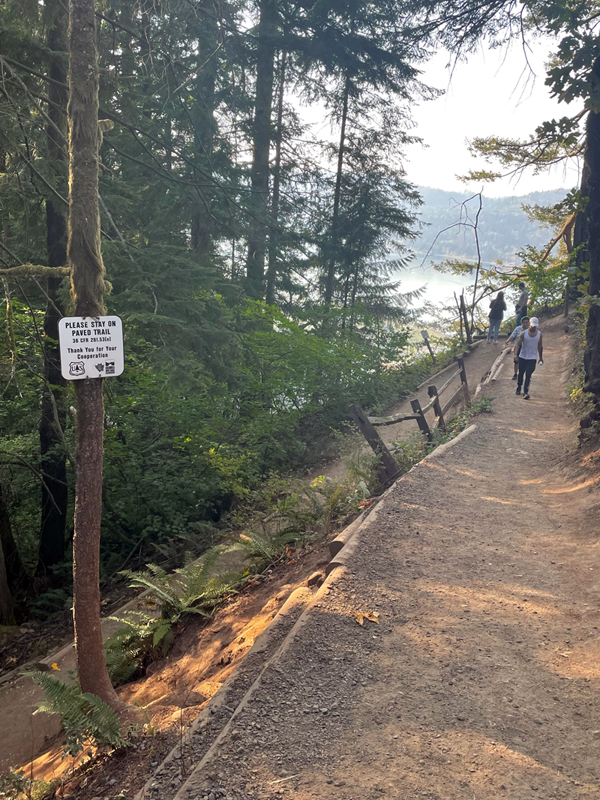 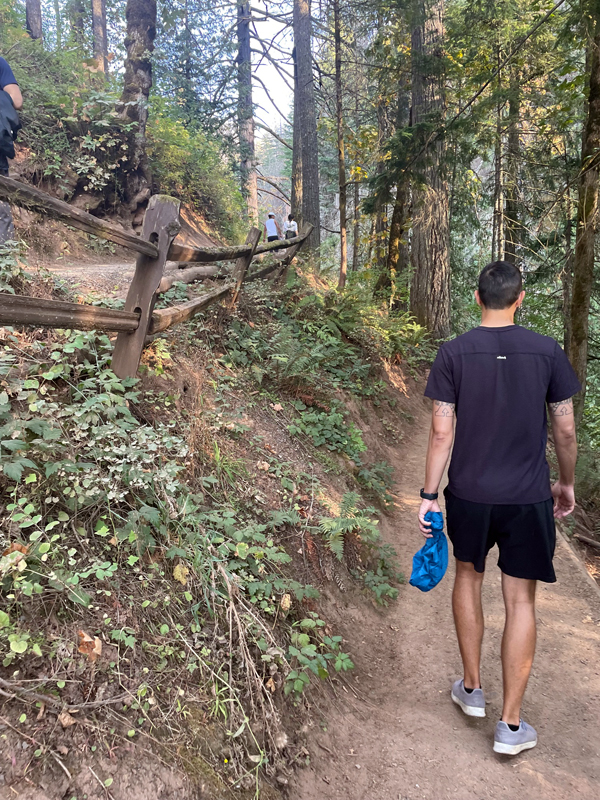 After the final "switchback" random people start saying "you're almost there!", and then the path shifts downward, which is very relieving on the knees. When you finally arrive at the top of the waterfall, it's... a little underwhelming, honestly? Maybe I'd get more out of it if I liked heights. Then you just turn around and go back. (Unless you first need to retrieve the other half of your that party went ahead and got lost on an even longer trail.) 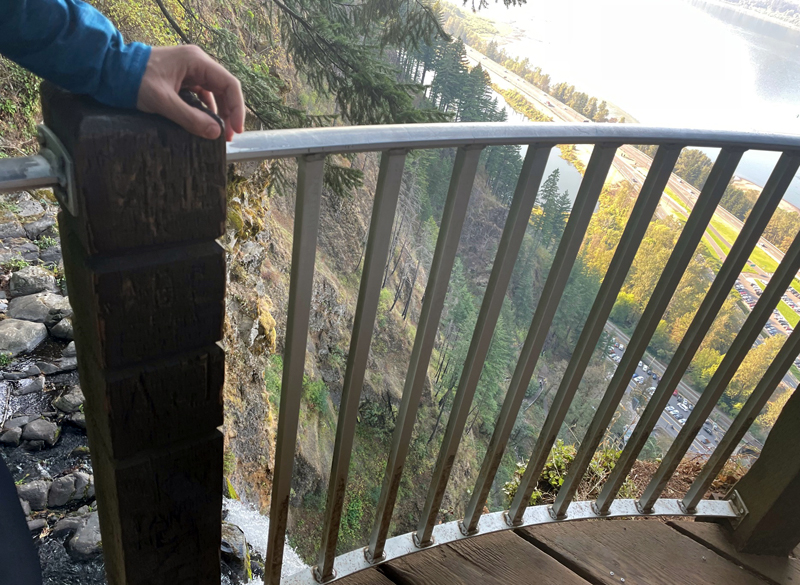 Multnomah finds a way to capitalize on the foot traffic. Back at the bottom of the falls, there's a cobblestone snack bar heralded with a giant picture of a swirl soft serve cone. Obviously advertising works, and we were all craving one. My sister tried to balk at the $4.75 price tag, but her boyf told her that "soft serve is worth $20 to me right now."

Yeah, that hit the spot. Not the best ice cream, but the most dependable. 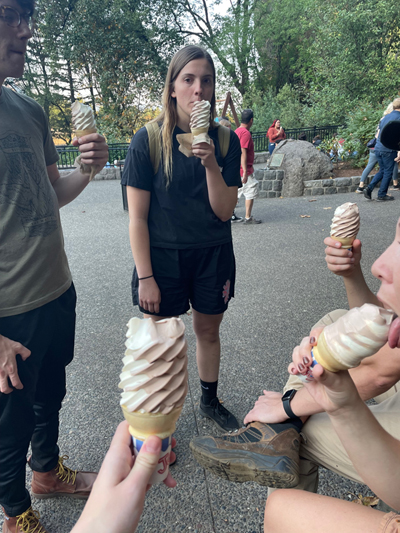 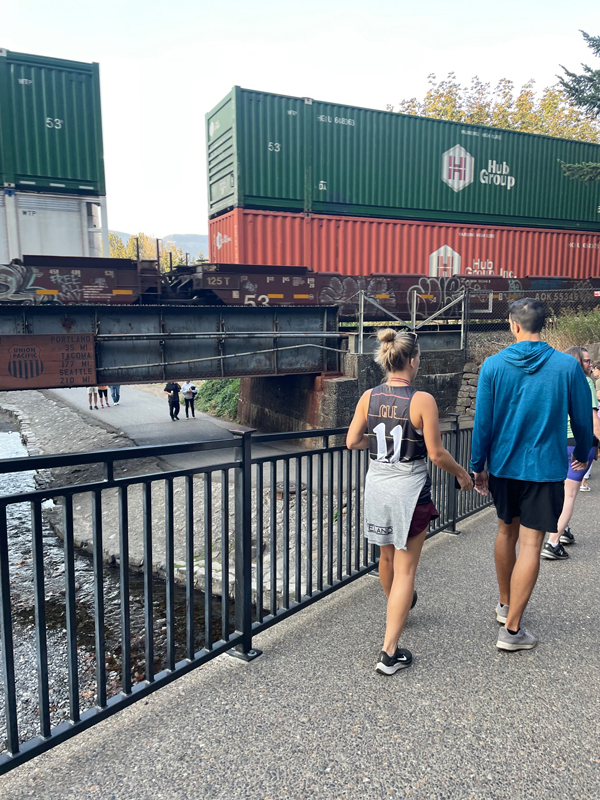 OH, and the path to the parking lot is UNDER A VERY BUSY RAILROAD. The first time we went under, the whole thing felt very rickety and wrong despite the apparent sturdiness of the engineering. I opted to wait the train out on the second go-through, ha.

Crowded and not terribly interesting. Adjacent to other trails that probably have more to offer. Gets a point for ice cream.

For dinner, a lot of people still had Ranch pizza left over but uhhh weren't wild about it. We ended up getting PDX Sliders, which offers two sizes of every burger. Holy fuck their pulled pork with arugula and red pepper is fucking SEXYYYYYYYYY, is there cumin in there? There's definitely some southwestern spices going on. Oh no, now I want one again.

The next morning, we got up at the crack of dawn to make it on the plane home. I did not think ahead and had to use a plane's bathroom for the first time in my life. 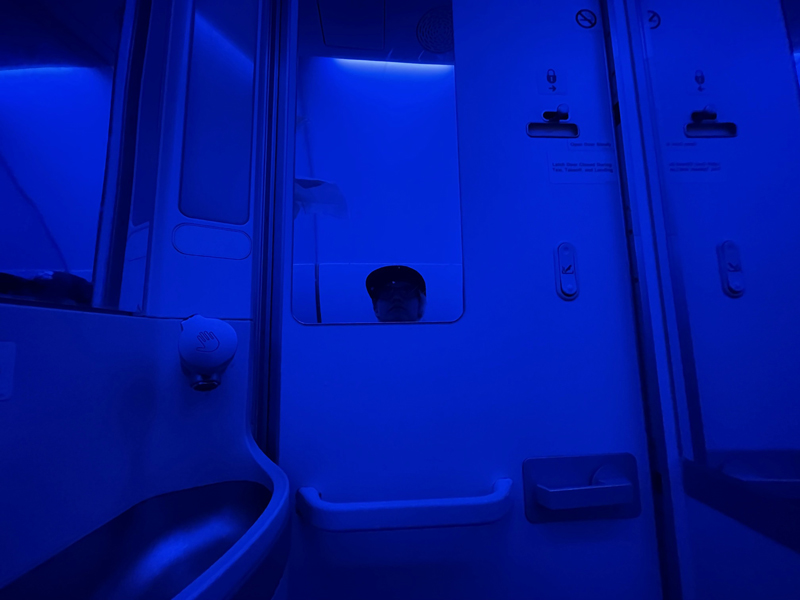 I'm told the blue light means I didn't close the door correctly. I assumed it was to make the experience as unpleasant as possible so people wouldn't have sex in there.

It was very weird. I may have forgotten to flush.

Anyway, Colin was waiting to drive me home like the beautiful creature he is and we both gushed/complained about our week and how much we missed each other's sanity.

You have good food and nice people. I'll be back.

Aaaaand now that I've caught my breath, I have to pack for a furry convention.